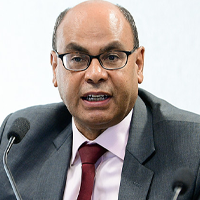 International Advisor to the Brazilian Center for International Relations (CEBRI). He was recently appointed Ambassador of Brazil to Asunción. In Brazil, after holding various positions at the State Secretariat, most recently the Ambassador was head of the Agriculture and Commodities Division and Director of the Regional Mechanisms Department.

In addition, he has served as a sub-sherpa and senior Brazilian official of the following interregional mechanisms: BRICS, IBAS, ASA, ASPA, FOCALAL, and participated in several Summit and ministerial meetings of these groupings between 2011 and 2016. He has a degree in Economic Sciences from the Federal University of Rio Grande do Sul and a specialist degree in Economics from the Center for Economic Studies and Research of the same university. He graduated in the Diplomat's Career Preparation course and also completed the Diplomat's Improvement course and the High Studies course (CAE) with the thesis "The G-20, from Cancun to Hong Kong: interactions between economic and public diplomacy".