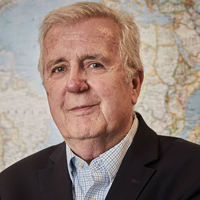 He served as Undersecretary of Foreign Trade of the Ministry of Economy of Argentina and member of the Mercosur Common Market Group (1998-1999). He was Executive Director of the Club Europe-Argentina (1992-1998) and a member of the law firm Dr. Héctor Alegría (1994-1998); Undersecretary for Economic Integration of the Ministry of Foreign Affairs of Argentina; National Coordinator of the Mercosur Common Market Group and President of the Intergovernmental Committee of the Paraguay-Paraná Waterway (1991-1992); Assistant Manager for Integration of the Inter-American Development Bank (IADB) (1984-1990) and Advisor to the President of the IADB on integration issues (1990-1991); Undersecretary for International Economic Relations of the Ministry of Foreign Affairs of Argentina (1982-1983); Academic Secretary of CARI (1978-1982); Director of the Institute for the Integration of Latin America - INTAL-IADB (1975-1977) and Head of the legal studies area of INTAL (1966-1975).

Speaker and frequent participant in numerous academic and business events in Argentina and other countries. Author of numerous publications (articles published in books and magazines) on economic integration, international trade law and international economic relations, including a book co-authored with Professor Celso Lafer on "Argentina and Brazil in the system of international relations", published in Buenos Aires and São Paulo, in 1973. Occasional contributor to the newspapers La Nación (Foreign Trade Supplement); Valor Econômico from São Paulo and the Gazeta Mercantil. He is a member of the Academic Council of the journal Archivos del Presente. He has been a consultant to numerous international organizations (IADB, ALADI, Andean Community, Caricom, CACM, UNCTAD, SELA, UNDP, UNIDO, IRELA, CELARE).

As first officer and then Director of INTAL (1966-1977), then as Deputy Integration Manager of the IADB (1985-1990), and as consultant to several organizations, including UNDP and UNIDO, he promoted and participated in numerous projects and activities related to business participation, especially of small and medium enterprises, in foreign trade and integration processes. He has lectured in numerous universities in Argentina (Universidad del Salvador; Universidad de Ciencias Empresariales y Sociales; Universidad de Buenos Aires - Master in Mercosur) and also in Brazil (Universidade de Brasilia; Universidade de Sao Paulo; Universidade Luterana do Brasil). He was a visiting researcher at the Institute of International Relations of the University of California at Berkeley (1973). He was a member of the International Legal Studies Group of the Carnegie Endowment for International Peace (1970-1974).

Debate | China's Belt and Road: What Role for Latin America?

30 Years of Mercosur - Panel I