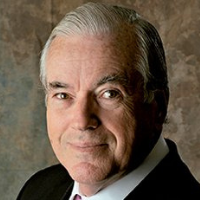 Founder of the Brazilian Center for International Relations (CEBRI). Marcus Vinícius Pratini de Moraes worked for different sectors of public service. In 1964, he represented Brazil at the United Nations (UN) seminar on industrial complexes held in Tachkent, then Soviet Union. He served as Minister of Industry and trade (1970-1974), was elected Federal Deputy for Rio Grande do Sul (1983-1987 / 1993-1995), Minister of Mines and Energy (1992) and Minister of Agriculture (1999-2003).

With a bachelor’s degree in Economics from the Economic Sciences College of São Leopoldo, Marcus Vinícius Pratini was also chairman of the board of directors of the Brazilian Association of Beef Exporting Industry. Pratini worked in different strategic segments of the JBS group, from the board of directors and audit committee to the internationalization of the company's operations.

As a professor, he served on the board of the Center of Advanced Studies in Management at the Warton School of the University of Pennsylvania in the United States, and was assistant professor in the politics and economic programming chair at the Economic Sciences College of São Leopoldo.

In 1971, he was awarded the rank of Grand Officer of the Military Order of Christ by the Government of Portugal.