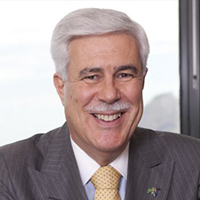 Member of the Advisory Board of the Brazil Institute at the Woodrow Wilson Center in Washington, D.C.

Veirano is a Trustee at the Brazilian Center for International Relations (CEBRI). He is the founding partner of the law firm Veirano Advogados. In 1972, while he was a partner of a law firm in the USA, Baker & McKenzie, he started the firm's Rio de Janeiro office.

Veirano Advogados is among the leading law firms in Brazil. He is a highly respected legal expert, internationally recognized for his diplomacy, ease with sophisticated legal issues and significant global network. Veirano has also been serving as Honorary Consul of Australia to Rio de Janeiro since 2000. In 2008, he received the respected Tiradentes Medal, awarded for services rendered to the city. He is a member of several national and international associations and plays an important role in the top management of several of these organizations.

He is currently a member of the Board of the Brazil-United States Business Council - Brazilian Section and the Brazil-China Business Council; Coordinator of the Governance and Nominating Committee of the Brazilian Institute of Corporate Governance (IBGC); Member of the Advisory Board of the Brazil Institute of the Woodrow Wilson Center in Washington, DC. He is also Chairman Emeritus of World Services Group, a global network of leading law firms and other professional service providers.

Brazil-France: A Strategic and Permanent Relation

Investments and Business Cooperation in China: Energy and Infrastructure

Europe in a Post-Pandemic World: Geopolitical, Economic and Social Scenarios

The Future of the European Union: Portuguese Presidency and Brazil-EU Relations

Capital Markets and post-Pandemic Growth: the Role of National and International Financial Institutions