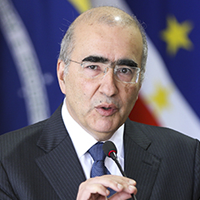 Brazil's Ambassador to the European Union

Trustee at the Brazilian Center for International Relations (CEBRI). Marcos Galvão has been Brazil's Ambassador to the European Union in Brussels since February 2019. Before this current post, he was Secretary General of Itamaraty, Ambassador to the World Trade Organization and Ambassador to Japan. He has also served, throughout his career, in Washington, DC, London and Asunción.

He also held various positions in the Ministry of Foreign Affairs and other organs of the Federal Government in Brasilia. At the Rio Branco Institute, where Brazilian diplomats are trained, Ambassador Galvão was Professor of Brazilian Foreign Policy and Diplomatic Language.